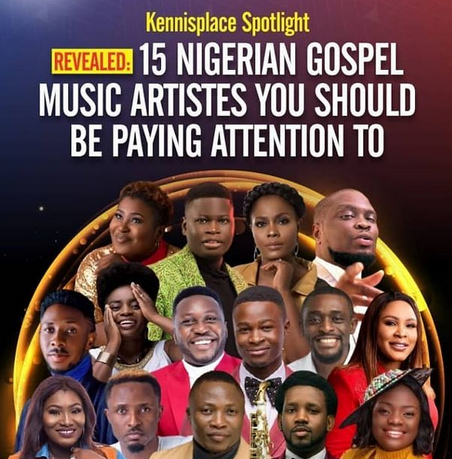 Gospel music in Nigeria has not been given the kind of visibility it deserves.The genre is mostly treated has a niche that gets attention only on Sundays.

Though this narrative is gradually changing, thanks to some Christian creatives adding value in that space, more can still be done.


#Kennisplace takes a look at gospel artistes whose artistry, songs and message are worth paying attention.

Onos Ariyo better known as Onos has a voice that can calm frayed nerves. If you have ever been under her ministration, you cannot but conclude that this is a woman who knows how to lead people into God’s presence.She is based known for her critically acclaimed song ‘Alagbara’

Bolaji Banjoko a.k.a BeeJaySax is a Christian Afro Jazz saxophonist who draws from traditional Nigerian sounds to create an irresistible  melody.

He has ministered at events like The African Praise Experience, The Experience amongst others.

He is also the host of Beejaysax live.

When you are looking for a groovy ‘Alujo’ artiste with a bias for excellence, look in the direction of Laolu Gbenjo.

Laolu Gbenjo gained public recognition after  he released, Expression (Baba Faye mi Dabira) in 2014. But the album, Next Level,  shot him into limelight.

Since then, his unique genre of Alujo has given him a dedicated and passionate fanbase on social media.

Adejumobi Oluwatosin, popularly known as Tosin Bee, is a gospel signed under One Halleluyah Records, a label owned by The Redeemed Christian Church of God.

One of the sterling qualities of Tosinbee would be his versatility.

The talented singer can lead an intense worship session this moment and serenade you with his brand of gospel Fuji the next moment.

Oluwadamilare Samuel Ogunderin, popularly known as Dare Justified, is one of the fast-rising gospel music ministers you should be paying attention to.

The passion the Oyo State born musician exudes when he sings is worth studying.

Dare is an enthusiastic worship leader who derives pleasure  when he leads worship in his dialect, (Yoruba).

Judith Kanayo a.k.a Judikay is an anointed and gifted gospel music minister.Judikay who is signed to Eezee Conceptz hails from Southern part of Nigeria and is a graduate of Theatre and Film Studies from The Redeemers University.

Her 2019 debut album, Man of Galilee, is a 14-track collection filled with songs of praise, worship and uplifting prayers, sung in English, Igbo and Yoruba. It is critically acclaimed and has been a huge blessing to many.

Her hit song ‘More than gold’ released two years ago has 14million views on YouTube as at the time of filing this report.

Nosa Omoregie, professionally known as Nosa has a melodious voice that soothes your soul and spirit whenever he croons. His critically acclaimed song ‘Always pray for you’ was nominated in the song category by the African Gospel Awards.Nosa has worked with the likes of Nathaniel Bassey, Frank Edwards and others.

Mairo Ese, is a Nigerian-born Christian singer and song-writer.Over the last 22 years, he has served in various capacities within the church – starting as a Chorister, progressing to Worship Leader, and then Music Director.

In 2015, he released his first album titled ‘The Worship of Yahweh’, a collection of songs that has blessed countless people with amazing testimonies all over the world.

Since the release of his debut album, Mairo Ese has gone on to release more hit singles such as Everlasting and The Only God. Furthermore, his sophomore album titled Spirit and Life, was released in September of 2020.

Akinada Ibuoye a.k.a Gaise Baba describes himself as a culture architectAn Economics Graduate (BSc) from Obafemi Awolowo University, he holds a diploma in Music Business from the Berklee College of music. With a Recording and Performing career spanning 10 years and counting, he experienced first-hand the dearth of opportunities, representation and platforms available to Christian artistes and creatives within the entertainment space across Africa. He is creating the solutions that meet this need.

Gaise Baba founded the LightOut High-School Initiative in November 2017, a value driven mélange of entertainment and advocacy for young students in High Schools and Colleges, inspiring and mentoring the students as they navigate their way through the critical season of adolescence. He is the host of Lounge 464, an African themed live music experience. Lounge464 holds first Sunday of each month, in the heart of Lagos Nigeria

The graceful Ibukun better known as IBK  is a singer, songwriter and artiste signed to Rox Nation Entertainment. She started singing from the age of five and started music professional and as a career in the year 2012 with the multiple award winning-singing group Xtreme, leading Amazing Worship songs  like “Na You Be God, Victory, Kosi, Nobody Like our God” amongst others.The ‘Iyanu’ crooner signed to Rox Nation in 2017.

She has served as a background vocalist under the leadership of the music maestro Tim Godfrey and has shared stages with numerous artistes in and outside of Nigeria. Artistes like Marvin Sapp, Kirk-Franklin, Travis Greene, Hezekiah Walker, Kim Burrell, J-moss,, Todd Dulaney, Tasha Cobbs, Micah Stanley and others, and in Nigeria.

Adeyinka Alaseyori is a gifted gospel music minister with a knack for delivering her melodious songs in Yoruba. Her nickname ‘Alaseyori’ was inspired by her many years of toiling to put an album together and finally, God did it in some ways. The song chronicles her journey into being able to achieve the long time desire of her heart.Adeyinka was an accountant before she embraced her calling fully.She is mostly known for songs like Aye Ope , Oniduro Mi and Arojinle.

Okopi Peterson is no doubt one of the emerging gospel music ministers worth paying attention to. His trending song ‘Osuba’ has blessed lives in palpable ways.He is best known for songs like ‘Osuba’, ‘O ga eme’ and others. Peterson has shared the stage with the likes of Dunsin Oyekan, Nathaniel Bassey and others.

When you think of Ernieola Olusoga words that comes to mind would be creative, versatile and effervescent.Ernieola is a gospel music minister, voice coach and fashion consultant.She is the Founder of a worship ministry- “The Rebirth team” which holds an annual gospel event called  WWW (Word,Worship & Warfare). She is also the founder of “Team Da Testifiers” (her music band).She has ministered alongside Tope Alabi, Mike Abdul and others.

Banke Adeyemi better known as Oba is a gifted gospel music minister, author and  inspirational speaker. Many won’t forget in a hurry her melodious rendition of the hit song ‘Olorun Agbaye by Nathanel Bassey where she was featured alongside Chandler Moore.She describes herself as a Christian artiste making a divine statement with an African Signature.

Bidemi Olaoba is not your usual kind of gospel artiste. The ‘Akanchawa’ crooner is known for his unique way of rendering gospel highlife music. Olaoba was introduced majorly as an artiste, when he was invited to minister at Marathon Praise Organized by the Redeemed Christian Church of God .After that event, he gained more popularity. He is better known for songs like ‘Bonjour’, ‘Final Say’ and ‘Akanchawa’