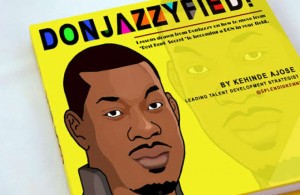 Within everyone is a silent yearning to become more,make a mark and go above and beyond the mediocre. Don Jazzy the head honcho of the Mavin crew represents a new breed of young African change agents who are employing and deploying their natural endowments in creating viable businesses, giving youngsters a platform to express their gifting, profiting  from their passions and using their lives to tell inspiring stories.Kehinde leads the reader through an easy to apply, step by step method that can help anyone achieve celebrity status in their chosen field.
Kehinde Ajose, respected journalist, media entrepreneur and sought after  talent development strategist has released the E-version of the landmark book Donjazzyfied…lessons drawn from Don jazzy on how to move from ‘Best kept secret’ to becoming a ‘Don’ in your field. This brave book is not about Don Jazzy in the end but about an understanding of our struggles with dreams, desire to succeed, guidelines for achievement of dreams, and the answer to that secret doubtful  questions we have been battling with over our dreams.
“Don jazzy is an inspiration that left me with much admiration and one question; Why should I fear to succeed:”?said Kehinde Bankole, respected Nollywood actress who starred in Kunle Afolayan’s recent movie ‘October 1’ What makes Don jazzy a force to reckon with? What branding lessons can be learnt from this showbiz don ?How did he emerge as one of the most influential showbiz personalities on Twitter? These are some of the thought provoking questions answered in this collection of inspiring and instructive bits and pieces on the Don jazzy phenomenon.
Here are the 8 facts
Titled-  Donjazzyfied: How to move from best kept secret to becoming a don in your field ,the book was written by one of Nigeria’s most respected writer and  journalist Kehinde Ajose.
Crafted in an easy to read language . It is one of the best books on how to make a mark and a   become an irresistible brand in any field with  Don Jazzy being the case study laid bare in 9 chapters.
Even though some might have forgotten or might not even know Don Jazzy‘s real name ,the book reveals that,  tales of his humble beginnings,  amongst other issues.
The book is endorsed by Kehinde Bankole a leading Nollywood actress who recently featured in Kunle Afolayan’s  wave making flick October 1.
Celebrities Like  Emma Nyra, Shine Begho of Cool FM, Annette Cookey, Senator the comedian, Olorisupergal and others said amazing things about Don Jazzy in the book.
Twitter is a major tool Don Jazzy deploys in order to build an engaging brand…How he makes it happen is also  analyzed in the book.
The secret behind the Mavins hit song and how you can apply it to your craft is also unveiled in this book.
How Don jazzy bounced back from the Mohits break and the lessons to adopt can be gleaned from this book.
What Donjazzyfied will do for you
Identity – Helps you to identify your own unique brand traits
Buying this book is one of the greatest decision you will take this year.Don’t procrastinate. Don’t let the doubter whisper to you.
ORDER INSTRUCTIONS
This has only been released as a digital copy. You can read on any of your mobile devices or computer. To read the .epub version, make sure you download an ebook reader to use on your device.
To order call-08024212530
E.mail-Kehinde@kennisplace.com
BBM-3332d0b1
Loading Facebook Comments ...